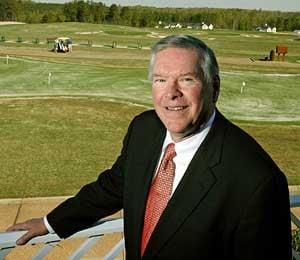 E. Claiborne Robins, Jr., a native of Richmond, has made a lifetime of contributions to athletics in Virginia. Continuing his father’s work with the Robins Foundation, established in 1957, Robins’ philanthropic work has sustained numerous community programs in the Richmond area.

A graduate of the University of Richmond, Robins served on the University’s Board of Trustees for over 40 years. He is a recipient of the Alumni Distinguished Service Award and an honorary Doctor of Laws Degree from the University.

In 2003, Robins was inducted into Richmond’s Sports Hall of Fame, in recognition of his support of the Spider athletics program. Two major gifts by the Robins family have made possible the construction of the Robins Center athletic complex (1973) and the on-campus, multipurpose stadium which will be home to Spiders football in 2010. In addition, Robins has provided generous support to athletic scholarships and endowments for basketball and football, while also providing team transportation through his air charter business.

Robins has been instrumental in the growth of the Independence Golf Club, a project of the Virginia State Golf Association. The course opened in 2001 as the first association-owned facility to combine the elements of a successful golf operation with a program-oriented golf center, in an effort to grow the game among children.
Robins’ charitable work has touched many other organizations, including the Virginia Foundation for Independent Colleges, Virginia Historical Society, Richmond SPCA, Maymont Foundation and the Virginia Sports Hall of Fame.