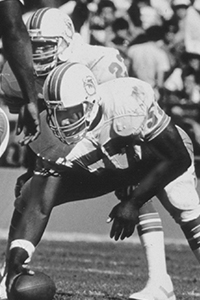 Dwight Stephenson is a native of North Carolina, but resided in Hampton, Virginia where he graduated from Hampton High School.  He was selected as the All-State Group AAA Team at Hampton High in 1975.  He also excelled at defensive tackle and lettered in basketball.  From that year on his accomplishments mounted rapidly eventually becoming legendary.

Stephenson attended the University of Alabama where, after switching from defensive end to center in his sophomore year, he was named All-American.    He was voted as the center of the NCAA Team of the Decade for the 1970’s.  He received the 1979 Jacobs Trophy, presented to the best blocker in the Southeastern Conference.   Stephenson was selected for the Quarter Century All Southeastern Conference (SEC) Team for his play from 1961 to 1985.  As a senior, he participated in both the Senior Bowl and East-West Shrine game.  Former Alabama coach, the great Paul “Bear” Bryant, called Stephenson the greatest center he ever coached.

Dwight Stephenson played for the Miami Dolphins from 1980 through 1987, becoming a starter in late 1981.  He was selected to the AFC team in the Pro Bowl five times and repeatedly chosen to all-star teams by the Associated Press, United Press-International, and other major publications.  He was selected as AFC Offensive Lineman of the Year in 1986, and anchored a line that allowed the fewest sacks in the NFL for five successive years.  Stephenson was the 1985 Miller Lite NFL Man of the Year, for his work in charity and community projects, becoming the first Dolphin winning that award since its inception in 1970.  The Dolphins’ offensive captain started in two Super Bowls (XVII and XIX), and three AFC Championship Games.  He played in 107 consecutive games from 1980 until the players’ strike in 1987.  Dwight Stephenson returned after the strike and started seven straight games before he suffered a serious left knee injury and was forced to retire the following year.

In 1984, Dwight Stephenson along with another teammate received a silver Medal of Valor from Miami-Dade Police Department in recognition of efforts to catch three burglars responsible for over 30 break-ins.  This award is the highest that can be bestowed upon a civilian.   In 1998, he was elected into the Pro Football Hall of Fame in Canton, Ohio.  Stephenson has been prominently involved in charity work in South Florida and is considered by many, to be the best center to ever play the game of football.