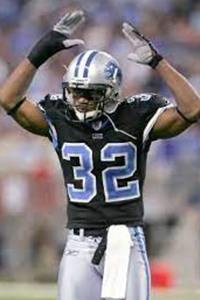 Dre Bly, a native of Chesapeake, Virginia, graduated from Western Branch High School, where he was an all-state high school football player before attending the University of North Carolina at Chapel Hill. As a redshirt freshman, Bly led the nation with 11 interceptions, receiving All-American honors. Bly is one of only five players in NCAA history to be selected an All-American in his freshman season. The following season, Bly was selected as one of three finalists for the NCAA Defensive Player of the Year award. Bly ended his NCAA career with 20 interceptions, and was a three-time All-American. Bly was drafted in the second round of the 1999 NFL Draft by the St. Louis Rams. Bly played for the Rams for four seasons, earning a Super Bowl ring in Super Bowl XXXIV, before signing with the Detroit Lions as a free agent. 2003 was a banner year for Bly, when he intercepted six passes and scored two defensive touchdowns, earning first team All-Pro and was a Pro Bowl Selection. Bly was the 2003 recipient of the Detroit Lions/Detroit Sports Broadcasters Association/Pro Football Writers Association’s Media-Friendly “Good Guy” Award. The Good Guy Award is given yearly to the Detroit Lions player who shows consideration to, and cooperation with the media at all times during the course of the season. Dre Bly was traded to the Denver Broncos in 2007, where he had a total of 98 Tackles and 7 Interceptions. Bly also played for the San Francisco 49ers and played a second stint with the Detroit Lions, to finish his career. Over his 11-year NFL career, Bly finished with 43 interceptions, 420 tackles, seven defensive touchdowns and was a two-time Pro Bowl selection. Bly was inducted into the College Football Hall of Fame in 2014.