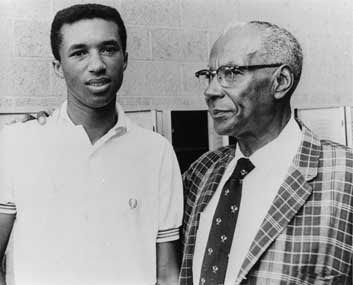 Dr. Robert Johnson was known as “Whirlwind” because of his football prowess.  He won over fifty trophies in tennis, playing doubles and mixed doubles, including six National Championships.  This man was none-the-less almost better known for his contributions in the development of tennis programs in the United States, particularly for black youth.

Dr. Johnson, a Norfolk native, graduated from Lincoln University in Pennsylvania.  He was named as a member of the Football All-American Team in 1924.  He became interested in tennis in 1933 while doing his internship at Prairie View, Texas.

Due to his own proficiency, Dr. Johnson had an impulse to involve everyone he met in tennis.  He personally formed the ATA Junior Development program in which boys and girls are coached in tennis free of charge.  He secured well over 100 tennis scholarships for players at various colleges including such outstanding universities as UCLA and The University of Pennsylvania.

He personally molded the careers of Althea Gibson and Arthur Ashe, both of which became recognized as world tennis figures.  Arthur Ashe was the first black to be selected to the Davis Cup Team.  Johnson served as Vice President of the American Tennis Program but refused to become president so that he could continue his work in the Junior Development Program.  He then organized the ATA National Interscholastic Championships.

Johnson’s service to youth was recognized in the receipt of such awards as The Certificate of Merit by the Baltimore Tennis Club, The Atlanta Georgia 100% Wrong Club Award, and the Lincoln University Alumni Award.  In the dedication of his book by Dr. Frederick West, he cited Dr. Johnson for his work with the youth of America and his work for community and race relations in the United States.  Dr. Johnson died June 28, 1971 and will be remembered for his achievements in sports in the state of Virginia.