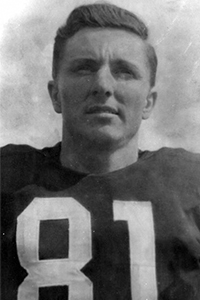 Dr. Richard “Dick” Humbert was a four-sport letterman at the University of Richmond and winner of the National Football League Rookie of the Year Award in 1941 playing for the Philadelphia Eagles from 1941 to 1949.  The Suffolk native earned All-Pro honors as well as the Rookie of the Year award in his first year.

In his three varsity seasons at Richmond, the Spiders finished with a record of 19-7-3 mark in football.  Humbert also competed on the varsity level in baseball, basketball (as captain) and track.

While playing both defense as well as offense for the Philadelphia Eagles the 6’2, 175 pounder helped the Eagles to win Two World Football Championships.  Philadelphia defeated the St. Louis Cardinals in 1948 and the Los Angeles Rams in 1949, after losing to St. Louis for the title in 1947.

After ending his playing career in 1949, Humbert returned to college and received his Masters degree, but kept his foot in the athletic door through coaching.  For over 20 years, Humbert taught at the University of Richmond and served 19 years as Chairman of the Physical Education Department resigning that position in 1980.

Upon being inducted into the Virginia Sports Hall of Fame, Humbert said, “Anytime you receive an honor like this, you feel very fortunate, an induction to a hall of fame is something I never anticipated.  It’s like a bonus you never expected.  It is an honor I will cherish because I know 95% of the folks in the Hall of Fame.”