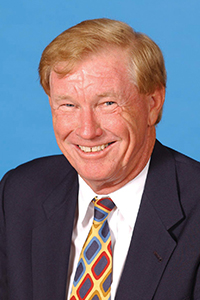 Dr. Jim Jarrett joined the Old Dominion University staff in 1967 as Associate Professor of Health and Physical Education and took over the Athletic Director position in 1970, where he remained until his retirement in 2010. During his 43-year career as Director of Athletics, the athletic program maintained a 91% student-athlete graduation rate. In 1974, Jarrett became the first Athletic Director in the Virginia to offer athletic scholarships to women. Over his term, the ODU Athletic programs won 28 National Championships, 18 of those in women’s sports. He was a charter member of the NCAA Women’s Basketball Committee and served as President of the CAA, the Sun Belt Conference and the Virginia Sports Hall of Fame. He was named NACDA Southeast Regional Athletic Director of the Year, Norfolk Sports Club Man of the Year, and the Collegiate Director of the Year by the Women’s Basketball Coaches Association. In 2005, Jarrett was recognized with the Distinguished Service Award by the Virginia Sports Information Directors’ Association and in 2007, he was the recipient of the Lifetime Achievement Award by the National Association of Collegiate Directors of Athletics.