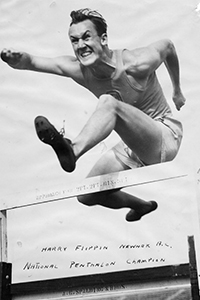 Dr. Harrison Fitzgerald Flippin was born October 26, 1906.  He attended the Episcopal High School in Alexandria, where he was head monitor, captain of the football team, and participated actively in baseball, basketball, and track.  At the time of his graduation, he turned down a major league baseball contract.  The field house at Episcopal High bears his name.

He entered the University of Virginia in 1926, obtaining both a Bachelor of Science Degree and a Doctoral Degree in 1933.  While at the University, he continued his interest in athletics, playing end on the football team and winning the National Pentathlon Championship in 1927.   He was a one time holder of the 60-yard indoor high hurdles and the 70-yard indoor low hurdles records.  He was a member of the University’s 3-3-3 Athletic Council and served as track coach in addition to being captain of that team.  He showed great versatility as a student leader at Virginia, serving as Grand Banana of the Eli’s, King of the Imps, President of the Academic School, Chairman of the Honor Committee, and President of the graduating class of 1933.  He held membership in Kappa Sigma Fraternity, the Raven Society, Phi Beta Kappa, Omicron Delta Lapps, The Society of the Sigma XI, and the Medical Honary Society, Alpha Omega Alpha.

Following graduation from medical school, Harry Flippin began his distinguished career at the University of Pennsylvania Hospital and School of Medicine.  He served on boards of various medical and civic groups as well as publishing well over a hundred articles and books on medical and scientific subjects.  For over ten years he was medical director of the National Football League, as well as personal physician and advisor to Earle (Greasy) Neale and his two-time world champions, the Philadelphia Eagles.