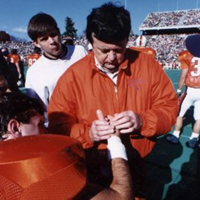 Dr. Frank C. McCue III was a doctor and medical assistant for the University of Virginia athletic program from 1961 to 2003. During his tenure at UVA, McCue treated many
Cavalier student-athletes as well as other athletes and patients from across the state, including Class of 2001 Inductee Barry Parkhill.

McCue served as surgeon to the University of Richmond, the College of William & Mary and Virginia Military Institute athletics programs before they had their own doctors.
In 1998, the McCue Society was created to provide a variety of scholarships in the field of sports medicine to both graduates and undergraduates. The society, made up of McCue’s former colleagues, fellows, athletic trainers, students and friends, also provides a forum for sports medicine education and research.

Dr. McCue passed away on July 8, 2012. Dr. McCue had a profound impact on sports medicine and education, and he received numerous honors. Recognizing him with the Distinguished Virginian Award is a way to celebrate his valuable contributions.

“He’s touched so many lives, and it goes way beyond just taking care of athletes.” — Inductee Barry Parkhill, Class of 2001