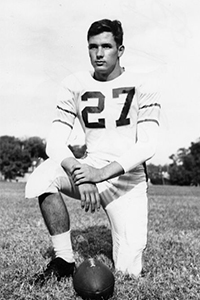 John A. Mapp born in Portsmouth, Virginia but raised in Norfolk gained prominence in track at Granby High School.   He attended VMI in 1950 when freshmen were not eligible for varsity sports.  He played defensive back on the freshman football team and led them in tackles and interceptions.  But it was in the spring that he shone with the freshman track team, winning five events in every meet.

As a sophomore, Mapp twice outscored the opposition by himself while winning five events in a single track meet.  He won hurdles, both dashes and the broad jump.  In the fall, he started every game for the football team as a defensive back, and on each of his three pass interceptions he averaged over 50 yards per return.  Mapp was named honorable mention All-Southern and was second team All-State and first team All-Southern as a defensive back in his junior year collecting 10 pass interceptions.  Next, he began to break and set records in indoor track, and after winning the state and conference crowns, he finished third in the NCAA meet and competed in the National AAU meet.  In one dual meet that year he set three VMI records in a single day.

Mapp’s senior year was even more remarkable.  He earned four first places in the conference meet, scored 21 points in the state AAU meet, and finished second in the low hurdles at the NCAA meet at Michigan.  Mapp also finished second in the National AAU low hurdles, and declined a coach’s offer to help him train for the 1956 Olympics.  He was determined, instead, to go to medical school and for that reason turned down professional football after being drafted by the Cleveland Browns.  In football his senior year, Mapp was co-captain of the VMI team which won the state championship, and it was his first season playing offense.  Mapp played both ways, and led the team with 13 touchdowns, tied for third in the nation.  His average of 5.8 yards per carry led the state and conference and was 25th in the nation.  Mapp returned kickoffs and punts; intercepted three passes, had ten receptions and was the team’s punter.  The sportswriters’ overwhelming choice as Southern Conference Athlete of the Year, Mapp was first team All-State and All-Southern in football.  He was also honorable mention AP All-American, and Football Player of the Year in Virginia.