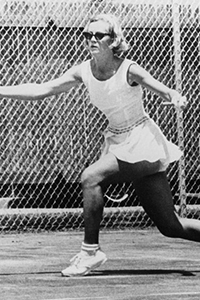 Donna Floyd Fales was born in Atlanta, Georgia in 1940 and moved to Arlington, Virginia in 1953.  By the age of 14, she was the top ranked 15 and under tennis player in the United States while winning the U.S. Girls 15 and under National Championships.

Fales dominated women’s tennis in the Middle Atlantic section throughout the 50’s.  She was the number one player in the Middle Atlantic Juniors from 1955-1958.  Donna was the youngest player (15 years old) to win the Virginia State Women’s Singles Championship.  In 1956, her father, Don Floyd, won the Men’s Singles, thus becoming the first father-daughter to hold the State Championship titles in the same year.  Donna won the Virginia State Women’s title twice more in 1957 and 1959.

As a 1962 graduate of the College of William and Mary, Donna was ranked in the top ten women in the U.S. six times from 1960-1966 and twice-ranked number 2 in doubles.  Playing on the international circuit, Donna won the U.S. Clay Court Women’s Singles, the Canadian Singles and Doubles Championship, the U.S. Open Mixed Doubles and was a quarter-finalist at the French, Wimbledon and U.S. Open Championships.  Donna played for the United States on the 1963 and 1964 Wightman Cup team, and was the team captain in 1964.  She captained the U.S. Federation Cup team in 1967, 1969, 1972 and 1974 and most recently, she was the Captain of the U.S. Bueno Cup.