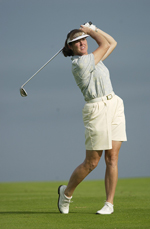 A native of Lynchburg, Andrews launched her successful golf career as a teenager. She twice won the Virginia Junior championship (1983 and 1984) and then won the VSGA Women’s championship five years in a row.

After playing collegiate golf at the University of North Carolina, Andrews joined the LPGA tour in 1990 and was named rookie of the year. Three years later, she won the first of her six tour events. She has one major victory, the 1994 Kraft Nabisco Championship. That came during her banner season which produced three tour wins and 12 top ten finishes.

Andrews’ last win was in 1998 when she also had four runner-up finishes. She has career winnings of $3.5 million. She has served as president of the LPGA and has been a longtime member of the executive committee.