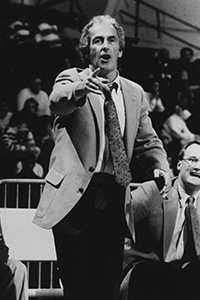 Dick Tarrant retired with the most wins in the University of Richmond’s history in March of 1993. In twelve seasons as head basketball coach, he amassed 240 wins. Additionally, Tarrant guided his team to nine post-season tournaments, five NCAA and four NIT. Richmond had never been to post-season play before his arrival, and they made their first NCAA appearance in 1984. The 1988 Spiders advanced to the NCAA “Sweet Sixteen” of the original 64 selectees and in 1991, Spiders were seeded 15 and upset the number 2 seed Syracuse. This marked the first time in NCAA history that a 15 seed had defeated a number 2 seed. Tarrant was named National Association of Coaches District 4 Coach of the Year five times, the Conference Coach of the Year five times, the State of Virginia Coach of the Year twice and Nike College Basketball Coach of the Year in 1988. In 1995, Tarrant was selected as CAA’s Coach of the Decade. In 1994, Tarrant was inducted into the University of Richmond’s Hall of Fame. Ten of the 36 scholarship student athletes Tarrant coached have been inducted into the University of Richmond’s Athletic Hall of Fame.