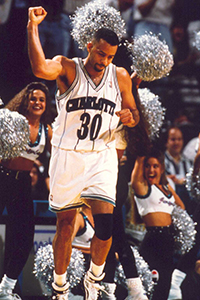 Since his early days at Fort Defiance High School, Dell Curry knew that basketball would be in his future. From winning a high school state championship to enjoying a standout college career at Virginia Tech, Curry showed basketball fans throughout the country why NBA scouts would soon be knocking on his door.

Curry led the Hokies with a career scoring average of 19 points per game. As a senior in 1986, he was voted the Metro Conference Player of the Year. As a member of the United States Jones Cup basketball team in both 1984 and 1985, Dell used this experience to catapult his career into becoming the 2nd all-time leading scorer in Metro Conference history. In 1996, Curry was honored at his alma mater by being inducted into the Virginia Tech Sports Hall of Fame. The All-American was also the first Hokie basketball player to have his jersey retired.

As a first round draft pick by the Utah Jazz in 1986 alongside players such as Brad Daugherty and Ron Harper, Curry began a career in which he would become one of the most feared three-point shooters in NBA history. After playing for only one season each with Utah and Cleveland, he was the first player to be chosen in the expansion draft by the Charlotte Hornets in 1988. Appropriately, six years later, he was named recipient of the NBA Sixth Man of the Year Award. He went on to set several Hornets franchise records, including most points off the bench, most consecutive free throws, and all-time leading scorer, before leaving for the Milwaukee Bucks as the last player from the original Hornets expansion team. His final year of professional play was spent with the Toronto Raptors, where he retired ranked 9th all-time in NBA three-point percentage.

In 1998, shortly before his retirement, Curry founded the Dell Curry Foundation, an organization whose main goal is to enhance the lives of youths in the Charlotte-Mecklenburg area. Through skill-based programs and community service projects, the foundation gives youth the opportunity to make positive contributions to society while benefiting from the guidance and support of the foundationÕs volunteer leadership. In addition to these programs, Curry also speaks annually to youths about the importance of a good education.