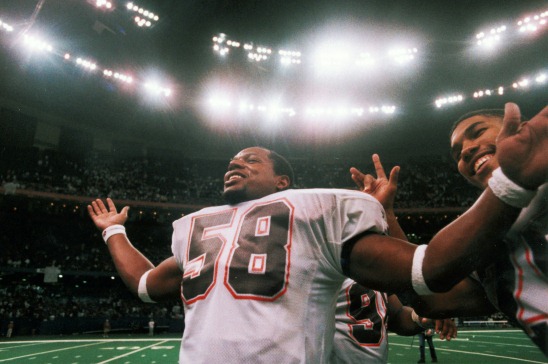 Cornell Brown, a native of Lynchburg, VA and graduate of Virginia Tech, is considered by many to be the first high-profile recruit of the Frank Beamer era. Brown, a defensive end, started four seasons for the Hokies and helped them to a 37-11 overall record, four-straight bowl games and a pair of BIG EAST Conference championships during that span. In 1995, he led the BIG EAST in sacks and led the Hokies to a 10-2 record and their first BIG EAST championship and a Sugar Bowl win over Texas. Football News named him National Defensive Player of the Year. After helping Virginia Tech to a share of the conference title and a berth in the Orange Bowl in 1996, he was named 1st team All-American. Brown’s 36 career sacks at Virginia Tech ranks 2nd all-time, behind only Bruce Smith. In the 1997 NFL draft, Brown was selected in the 6th round by the Baltimore Ravens where he played linebacker for the duration of his 7 year NFL career (1997-2004). Brown earned a Super Bowl ring with the Baltimore Ravens in 2000. Brown’s Virginia Tech jersey was retired in 2002, and he was later inducted into the Virginia Tech Sports Hall of Fame in 2007.