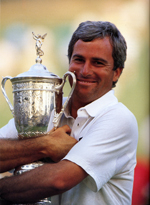 Golf has played a major role in Curtis Strange’s life since his days in Virginia Beach, Virginia, and rightfully so.  During the 1980’s, Strange was considered one of golf’s premier players, winning back-to-back US Open titles in 1988 and 1989, a feat that had not been accomplished since Ben Hogan in 1950 and 1951, and becoming the first player in history to win over $1 million in a single year.

Strange played golf every day from the age of seven at White Sands Country Club, which was owned by his father and fellow Virginia Sports Hall of Fame inductee, the late Thomas Strange.  Before leaving Virginia Beach for Wake Forest on an Arnold Palmer scholarship, he won the Virginia Junior Championship at 15 years old.  His days at Wake Forest as an amateur paved the way for his entry into professional golf.  He was a three-time All-American and a medalist at the 1974 NCAA tournament.  In 1974 and 1975, he was on the winning national championship team alongside teammates such as Jay Haas and Scott Hoch.

Following a successful collegiate career, Strange joined the PGA in 1976, where he was a three-time leading money leader while on the tour.  He currently holds the record score of 62, 10 under par, for the Old Course at St. Andrews. The 1980’s proved to be a golden time for Strange, who won 16 of his 17 PGA victories during those years.  The Golf Writers Association of America (GWAA) named Strange as Player of the Year three times (1985, 1987, and 1988).  More than ten years after becoming a professional golfer, he defeated Nick Faldo in an 18-hole playoff to win his first US Open, one of four victories in the 1988 season.

In an interview with Golf Digest, Strange eloquently stated his winning attitude, saying, “When you win a tournament, things don’t go as planned…we got into this game knowing that.  I just like to try.  Don’t care how many bad shots you’ve hit in a row, how many bad weeks you’ve had in a row, give yourself a chance.”
.