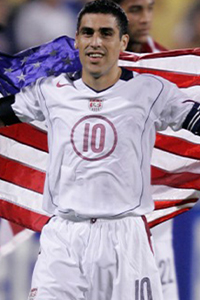 Claudio Reyna was born in Livingston, New Jersey, where he learned the game of soccer from his father. Reyna graduated from St. Benedict’s Preparatory School in 1991. During Reyna’s three years with the team, St Benedict’s went undefeated (65-0), while Reyna was named as the only two-time Parade Magazine’s national high school Player of the Year and the Gatorade National Player of the Year. Reyna earned a scholarship from the University of Virginia. With the Cavaliers, he would go on to win the NCAA championship each of his three seasons, while earning first team All-American honors. Reyna was awarded the Hermann Trophy in 1993, given to the United States’ top soccer player and was named the 1992 and 1993 Soccer America Player of the Year.

Reyna joined the professional ranks in 1994 with German Bundesliga club Bayer 04 Leverkusen after playing in the 1994 FIFA World Cup. He would have a 13-year professional career in Europe. Reyna played for the Bundesliga’s Bayer Leverkusen and Wolfsburg from 1995-99, Glasgow Rangers of the Scottish Premier League from 1998-2002, followed by Sunderland and Manchester City of the Premier League from 2001-07. In 1999-2000, Reyna helped lead Rangers to its 11th Scottish Premier League title in 12 years. Reyna made his way back to the States in 2007, joining Major league Soccer’s New York Red Bulls for their 2007 and 2008 seasons, announcing his retirement on July 16, 2008.

Reyna played for the United States National Team for 13 straight years from 1994-2006, earning 112 caps and 94 starts. Reyna also scored eight goals, and his 19 career assists rank third all-time. Reyna was a member of four FIFA World Cup teams and was captain of the 2006 team. Reyna was inducted into the National Soccer Hall of Fame in 2012.