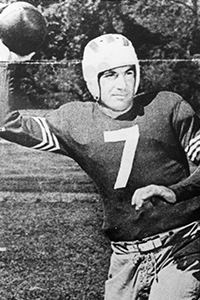 Clarence “Ace” Parker was truly one of the gridiron greats of all time.  He played offense and defense when specialists were unheard of.  Parker played for Duke University from 1932-36, quarterbacking the team to three successful seasons.   He proved to be one of the finest football players in the country by being named to every major All-American team in 1936.

Upon his graduation from Duke University he joined the old Brooklyn Dodgers of the National Football League, where he was a sensation from 1937 to 1942.  His playing career was cut short at this time when he joined the Navy in World War II, but not before he was a unanimous choice for All-Pro honors in only his second year.  In 1940, Parker was named the NFL’s most valuable player.

Parker showed his versatility by beginning his professional baseball career, where he duplicated the record of a select few major leaguers by hitting a home run his first time at bat while playing with the Philadelphia Athletics.  His pro baseball career later saw him manage several minor league clubs throughout the country.

Parker’s football coaching career returned him back to Duke University, where he was assistant football coach and head baseball coach for many years.  He then moved to the University of North Carolina and later became one of the top scouts for the San Francisco 49ers.