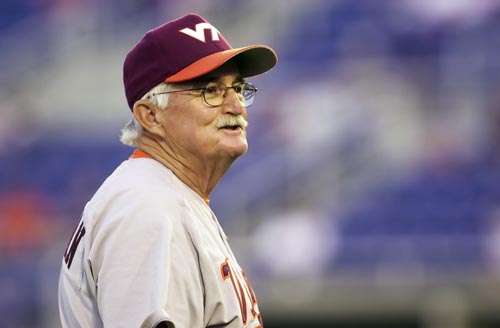 After leading High Point’s baseball team for 18 years from 1960-1978, Chuck Hartman took on the head coaching position for the Virginia Tech Hokies baseball program. Hartman would go on to patrol the Hokies dugout for 28-seasons, from 1979-2006. Under his coaching, Hartman had four players drafted in the 1st round of the Major League Baseball amateur draft. He had a total of 80 players sign with pro teams, including 56 whom he coached at Tech. His 1982 and 1985 squads set the school record with 50 victories in a single season. Six of his Hokie teams won 40 or more games, and in a run from 1969 at High Point through 2004 at Tech, 35 of his 36 teams posted seasons above .500, with four of Hartman’s Tech teams reaching the NCAA regionals in a seven-year span. The legendary coach retired with a career record at Tech of 961-591-8, and was a six-time District 26 Coach of the Year. His 1,444 wins rank 7th all-time among Division I baseball coaches. With his induction to the Virginia Sports Hall of Fame, Hartman will now be a member of eight Halls of Fame, some of which include the Virginia Tech Sports Hall of Fame, The National Association of Intercollegiate Athletics Hall of Fame, NAIA Hall of Fame, and American Baseball Coaches Association Hall of Fame.