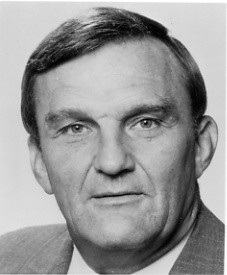 A true sportsman in every sense, Chuck Boone made a name for himself as a player, coach, and administrator throughout an athletic career that lasted more than forty years.  The University of Richmond would prove to be home to the Covington, Virginia native, whose career there came full circle when he started out as a two-sport all-star and ended with his retirement as Director of Athletics after 23 years.

As a Spider athlete he was captain of both the football and baseball teams.  He was named All-Conference in baseball for four years, and All-State and All-Conference in football.  As his collegiate career came to an end, Boone found himself having to decide between the American Football League with the Los Angeles Chargers and baseball with the New York Yankees organization.  He ultimately declined the Chargers’ offer and spent six years as a player and coach for the Yankees organization.

In 1967, Boone returned to the University of Richmond, and soon was named Assistant Athletic Director.  He was also the recipient of the Southern Conference Coach of the Year Award for his success as head baseball coach, leading the Spiders to the league title and the school’s first NCAA Baseball Tournament appearance.  In 1977, Boone was named Director of Athletics and during his tenure the school successfully raised $60 million for the Athletic Endowment fund, while several programs enjoyed tremendous growth.  The football program participated in several NCAA Division 1AA playoffs and the Yankee Conference championship.  The basketball program equally succeeded, participating in either the NCAA or NIT tournaments ten times, and advanced to the NCAA Sweet Sixteen in 1988.

Outside of the University of Richmond, Boone also served as an administrator for several organizations and accomplished even greater feats.  He was a member of the NCAA Executive Committee and the NCAA Championship Committee.  He was a founding member of the Colonial Athletic Association and chairman of the 1AA Football Committee.  In 2000, he was selected as the National Association of Collegiate Directors of Athletics (NACDA)/Continental Athletic Director of the Year.  Two years after his retirement as the university’s Director of Athletics, the All-American Football Foundation named Boone as the recipient of the General Neyland Lifetime Achievement Award.