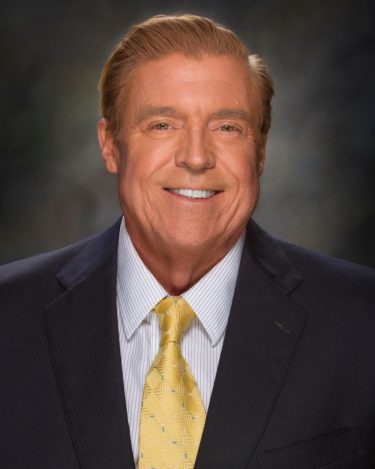 A native of Maryland, sports broadcaster Bruce Rader came to the Hampton Roads market in the mid 1970’s. In 1977 he joined WAVY-TV, and in 1979 was named Sports Director, a position he still holds. Serving the Southeastern Virginia market, Rader changed the landscape of sports coverage by putting the “local” back in local sports. Focusing on high school sports, Rader has spent the last four decades providing a platform for the athletes, coaches, and teams that call Hampton Roads home. Rader’s impact stretched to other underserved sports segments as well, becoming the first television broadcaster to provide regular coverage of the area’s Historically Black Colleges and Universities, even serving as host for the CIAA basketball tournament broadcasts. Rader was the first local broadcaster to cover the Washington Redskins in person with regularity, and routinely brought Virginia racing fans up close and personal with the Super Bowl of racing, through his coverage of the Daytona 500. His contributions are countless, and his accolades are numerous, including the George A. Bowles Jr. Broadcast Journalism Award from the Virginia Association of Broadcasters, the Abe Goldblatt Memorial Award from the Norfolk Sports Club, and the Tidewater Humanitarian Award from the Virginia Center for Inclusive Communities. Prior to his induction into the Virginia Sports Hall of Fame, Rader has previously been honored by the CIAA Hall of Fame, the Hampton Roads Sports Hall of Fame, and the Hampton Roads Sports Media Hall of Fame.