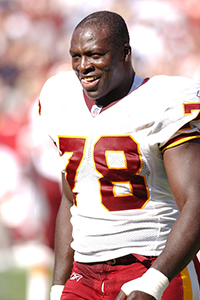 Smith, a native of Norfolk, first drew national attention at Virginia Tech when he won the 1985 Outland Trophy, awarded to the outstanding collegiate defensive lineman of the year. He was a consensus All-American that season.

Picked first in the draft by the Buffalo Bills, Smith quickly established himself as a defensive force and was named rookie of the year.

Over the next two decades, he became a dominant pass rusher and was named the league’s MVP in 1987 and 1997. He was picked for the Pro Bowl 11 times and voted the defensive player of the year four times. He anchored the defense that helped the Bills get to the Super Bowl four straight years. Amassing 200 sacks during his 19 year career, he now stands as the all-time sacks leader in the National Football League.

For a 6-foot-4, 265-pound defensive end, his stats were phenomenal – 277 games, 909 tackles, 316 assisted tackles and 200 quarterback sacks. Hall of Fame QB Joe Montana called him the best player he ever saw at that position. Smith played his last four seasons with the Washington Redskins and had five sacks in 2003 to run his total to 200.