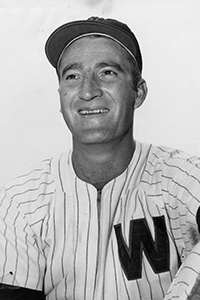 Porterfield, a native of Newport in Giles County, was signed off the Radford semipro team by New York Yankee scout H.P. Dawson and spent 12 years pitching for the Yankees, Washington Senators, Boston Red Sox and Pittsburgh Pirates. A right-hander with a 95 mph fastball, he compiled an 87-97 record with a 3.78 ERA.

Porterfield’s best season came in 1953 when he posted a league best 22-10 record with the fifth-place Senators. He posted nine shutouts and 24 complete games. Only two other American Leaguers (Bob Lemon and Mel Parnell) had 20 wins that year.

Injuries limited his success and his longevity. In his first start with the Yankees, a line drive broke his index finger. The next year, he was beaned and hospitalized briefly. Later, he suffered arm and back problems that curtailed his effectiveness. He died in 1980 at age 57.