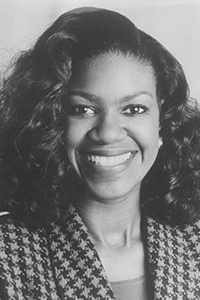 By the time most kids outgrow full-time running and jumping, Benita Fitzgerald Mosley was setting records doing just that.  In 1979, while competing in Atlanta, Georgia Mosley set the USA National High School Record in the hundred and dash with a time of 10.60 seconds.  That same season (1978-79), she was a member of the US Junior National Team competing not only in the US but the Soviet Union, Germany and England.  She was a long way from her hometown of Dale City, Virginia.

Following a prodigious high school career, Mosley earned her Industrial Engineering degree in 1984 from the University of Tennessee where she also starred on the Lady Volunteers track team.  Mosley was a member of the 1980 and 1984 U.S. Olympic Teams and an alternate on the 1988 Team, becoming in 1984, the only African-American woman to win an Olympic gold medal in the 100-meter hurdles and only the second American to accomplish the feat (following Babe Didrickson).  Mosley also won a gold medal at the 1983 Pan American Games, was national champion eight times and All-American fifteen times.

Honored by her hometown with “Benita Fitzgerald Drive,” Mosley has been named by “Track and Field News” as “Hurdler of the Decade” for the 1980’s.  The United States Sports Academy recognized Mosley as their 1996 Distinguished Service Award winner.  She was inducted into the University of Tennessee Hall of Fame in 1994 and was one of only eight U.S. Olympians to carry the Olympic flag into the stadium during the opening ceremonies of the 1996 Centennial Olympic Games in Atlanta.

Off the track, Mosley worked for some time in the engineering field, returning to the sports community in 1991 as a sports marketer working for the Special Olympics and for the Centennial Olympic Games Committee in Atlanta.  Mosley currently serves dual roles for the U.S. Olympic Committee as Director of Olympic Training Centers and Director of the Colorado Springs Olympic Training Center.  She has experience as a sports commentator and columnist, is highly visible as a motivational speaker and volunteers her time as former President of the Women’s Sports Foundation, and as a member of the Board of Directors of USA Track & Field.