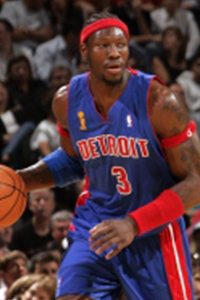 Ben Wallace attended Virginia Union University in Richmond, Virginia before becoming one of the most feared players in the NBA. Wallace was recruited by former Virginia Union basketball player Charles Oakley, when he discovered Wallace at a 1991 basketball camp. At Virginia Union, Wallace averaged 13.4 points per game and 10 rebounds per game. As a senior, Wallace was selected to the First-Team All-Central Intercollegiate Athletic Association (CIAA) and was selected as a First-Team All-American by the National Association of Basketball Coaches (NABC). Wallace signed as an undrafted free agent in 1996 with the Washington Bullets. Over his 16-year NBA career, Wallace played for the Washington Bullets/Wizards, Orlando Magic, Detroit Pistons, Chicago Bulls and the Cleveland Cavaliers. Wallace rose to defensive dominance after he was traded from the Orlando Magic to the Detroit Pistons for fellow Virginian Grant Hill. The 2001-2002 season was stellar for Wallace, when he averaged 7.6 points per game, while leading the league in rebounding and shot blocking. Wallace earned the honors of the NBA Defensive Player of the Year, an award he would win three other times in his career. Wallace led the Detroit Pistons to an NBA Championship in 2004, with Wallace scoring 18 points and grabbing 22 rebounds in the clinching game against the Los Angeles Lakers. Over his career, Wallace was a four-time NBA All-Star, three-time All-NBA Second Team selection, five-time NBA All-Defensive First Team selection, two-time NBA rebounding champion and an NBA blocks leader. Wallace totaled 6,254 points, 10,482 rebounds and 2,137 blocks.