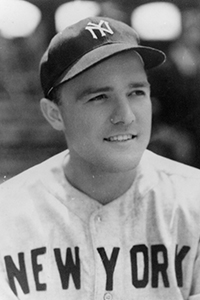 Though born in St. Louis, Missouri, Metheny’s entire career centers around the Old Dominion.  Metheny starred in baseball at the College of William & Mary where he earned his Bachelor of Science degree in 1940 and a Masters of Education in 1952.  His .572 batting average (1938) set a Southern Conference record.  Most of the schools comprising the Southern Conference now make up the larger Atlantic Coast Conference.

After leaving William & Mary, Metheny joined the New York Yankees organization.  He is the last Yankee to wear Babe Ruth’s #3 jersey.  It was retired following Metheny’s break with the team.  For several years, he played the outfield in the American League before gravitating into the minor league managerial ranks in 1947.  Metheny was an outfielder for Portsmouth in the Piedmont League from 1949-1950 and a manager for the Newport News team also in 1950.

Metheny was Old Dominion University’s Athletic Director from 1963-1970.  Under his administration the Monarchs won 8 Little Eight Championships, 4 Mason-Dixon Crowns, 2 Titles and one runner-up finish in the NCAA Eastern Regional Competition.

Metheny has been honored many times throughout his career.  Among the awards are 1965’s NCAA “Coach of the Year”, 1973 Norfolk Sports Club “Sportsman of the Year”, a 1973 citation from the National Conference of Christian and Jews Brotherhood, 1976 recognition from the International Organization of Basketball Officials and induction into the William & Mary and Tidewater Baseball Halls of Fame.  In 1983, the baseball field at ODU was named in Metheny’s honor.