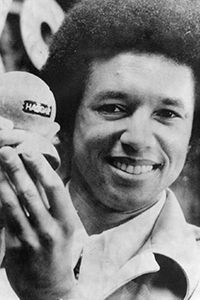 Winning championships and trailblazing in tennis are “old hat” to this first world-renowned titleist to be inducted into Virginia’s Hall of Fame for his sport, following his pioneering teacher Dr. R.W. Johnson.  At the age of 17, Ashe won the U.S. Tennis Association indoors’ crown for boys 18 years of age in 1960.  Three years later, he broke into the USLTA rankings for the first time when he was rated No. 6 of the nations finest.

In 1968, Ashe attained one of the highest plateaus of his distinguished career when he captured both the U.S. Men’s National and Open championships, and the latter title is particularly significant because the 1968 Open was the first amateurs and pros staged in this country.  He reached the No. 1 pinnacle for U.S. players twice.  After a No. 3 ranking in 1964, Ashe made it to the top in 1968 and repeated in 1975 when he ascended to the throne at Wimbledon.

A graduate of Maggie Walker High School in Richmond and the University of California at Los Angeles (UCLA), Ashe performed for his country in the Davis Cup international competition and was a member of the U.S. squad when it defeated Romania, 3-2.  He first gained World ranking (No. 10) in 1965 and climbed to No. 2 in 1968, when Rod Laver was at the peak of his game and was generally up in the Top Ten until beset by injuries in the middle 1970’s. When injuries limited him competitively, he became a leading ambassador and spokesman for tennis.  Ashe emerged as the tennis world’s leading philosopher and its outspoken conscience, pleading for reason and common sense in the conduct of its affairs and on moral grounds, applicable equally to white as well as black.

Most notably, he espoused (1) the lifetime benefits of tennis-playing strictly as a sport, and (2) was aware of the many doors opened to life-time benefits for youths aspiring to playing the sport professionally, but on both counts he offered common sense as the “watchwords” for the amateur and professional.  Ashe once wrote for World Tennis magazine, that “the concern should be the long haul after the peak or prime years of competition for the youngster torn between the pro tour and college” and the thousands of other young champions at the crossroads who face the decision of turning pro or embarking on other careers outside of tennis.

Ashe passed away on February 6, 1993.  He will always be remembered as one of the greatest tennis legends in America.