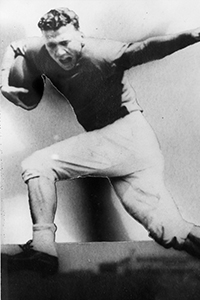 Art Jones was an all-around athlete at Suffolk High School, lettering for three years in football, track, and tennis and four times in basketball. Jones holds the Suffolk High record for being awarded the most letters in sports, a total of 16. Jones entered the University of Richmond where he was named to the All-State Team three consecutive years, 1938-39-40 and All-Southern in 1938 and 1940. He was the leading Southern Conference scorer in 1940 and leading punter in the nation in 1940. Jones lettered three years in basketball and three in track at Richmond while running the 100-yard dash in 10 seconds flat in Southern Conference Meet. He ended his collegiate career by playing in the Blue-Gray game at Montgomery, Alabama in 1940, starting at halfback and scoring one touchdown in a 14-12 loss to the Blue. He played in the College All-Star game at Chicago in 1941 against the Chicago Bears with such stars as Tom Harmon, Jackie Robinson and Forrest Eveshevski. Jones’ professional football career began with his selection in the first-round draft by the Pittsburgh Steelers in 1941, averaging 55 minutes per game for eleven games. Jones was selected All-Pro in his rookie year and was chosen to play in the All-Pro game in 1941 against the Chicago Bears. He started this game in the backfield composed of Sammy Baugh, Toughy Lemmons and Biggie Goldberg. Jones was credited with being the first player in the National Football League to wear low-quarter shoes. Jones entered the service as an Ensign in the Navy and during four years in the Naval Air Force serving in the Philippines during World War II. He returned to the Steelers in 1945, but while in the Navy played football with the Carolina Pre-Flight team that defeated William & Mary for their only loss in 1942. Jones was selected as a member of the University of Richmond All-Time backfield in 1963.