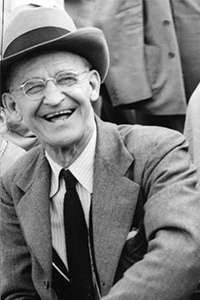 Archie Hahn came to Virginia as Head Track Coach in 1929. He succeeded the legendary “Pop” Lannigan. Hahn was also athletic trainer. He served as track coach until 1950. He produced some stellar track and field men and Virginia record holders. Prior to coming to the University of Virginia, Hahn was coach at Princeton University. As an undergraduate at the University of Michigan, he performed the astonishing feat of winning the 60, the 100 and the 200 meters at the Olympic Games in St Louis in 1904. In his 22 years at Virginia, he posted a dual meet record of 56 wins, 42 losses and 1 tie. The track team in his first thirteen years at the helm won twelve state championships. He produced winning relay teams at the famous Penn Relays during this time. One of Hahn√ïs hurdlers, Captain Frank L. Fuller, III, set a world record in the 70 yard high hurdles with a time of 8.4 seconds. Hahn passed away in 1955 but he will always be remembered for his significant achievements in sports in the state of Virginia as well as his world famous Olympic feats.