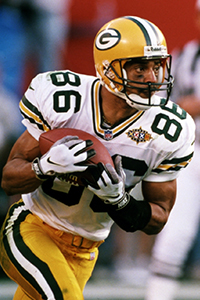 Antonio Freeman, native of Baltimore, MD, attended Baltimore Polytechnic High School, named the Baltimore Sun’s offensive player of the year and was recruited by Virginia Tech where he red-shirted as a freshman in 1990. In his collegiate career he set numerous records, many of which still stand, and as a senior, led the Big East in punt returns and ranked sixth nationally. Freeman’s career touchdown reception mark still stands and his 2,207 receiving yards rank second all-time at Virginia Tech. He was selected in the 3rd round of the 1995 NFL draft by the Green Bay Packers where he was a member of the 1996 Green Bay Packers Super Bowl team, 1998 All Pro Team and the 1998 NFL leader in receiving yards. His career totals 477 receptions, 7,251 yards receiving; 1,007 yards returning kickoffs and punts with 61 touchdowns. Combined with Brett Favre, he holds the record for 57 scoring passes, ranking 5th best in NFL history. He ranks 5th all-time on the Packers receivers list with 6,651 yards on 431 catches. Freeman was inducted into the 2006 Virginia Tech Hall of Fame.