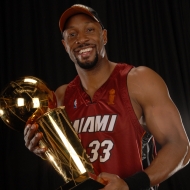 Alonzo Mourning was born in Chesapeake, VA and graduated from Indian River High School. As a senior, he was named Player of the Year by USA TODAY, Parade, Gatorade, and Naismith. Mourning attended Georgetown University where he led the nation in blocked shots his freshman year and was an All-American his last year there. He was selected second overall in the 1992 NBA Draft by the Charlotte Hornets. Mourning was named to the league√ïs all-rookie team in 1993 after averaging 21 points, 10.3 rebounds, and 2.37 blocks. He became the Hornets’ all-time career leader in blocked-shots. After three seasons with the Hornets, Mourning was traded to the Miami Heat where he played for the next seven seasons. He averaged 20 points and 10 rebounds per game. He won the NBA Defensive Player of the Year Award twice and was named into the All-NBA First Team in 1999 and All-NBA Second Team in 2000. Alonzo won Gold at the 2000 Olympic Games with the US National Team. Prior to the 2000-2001 NBA season, Mourning was diagnosed with kidney disease and in 2003, after signing with the New Jersey Nets, he was forced to retire from the NBA due to complications. In December of 2003, Mourning underwent a successful kidney transplant and in 2004, he returned to practicing with the Nets. After brief stints in New Jersey and in Toronto, Mourning returned to the Heat in 2005 and claimed the NBA Championship in the 2006 NBA Finals. During the 2007-08 season, he became the Heat√ïs all-time scoring leader. Mourning is a seven time NBA All-Star and is the only member of the Miami Heat organization to have his jersey (#33) retired. Throughout his sixteen year career in the NBA, he accumulated a total of 14,311 points, 7,137 rebounds, and 2,356 blocked shots. In 2009, he returned to the Miami Heat as Vice-President of Player Programs and Development. Also in 2009, Mourning had a new high school named in his honor as a result of his charity work done in South Florida.