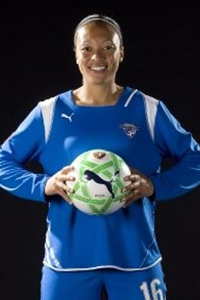 Angela Hucles, a native of Virginia Beach, Virginia, attended Norfolk Academy where she was a Parade and National Soccer Coaches Association of America (NSCAA) All-American selection in 1995. She graduated in 1996 as Norfolk Academy’s all-time leading scorer with 204 goals and 106 assists. Hucles attended the University of Virginia, where she became an All-American and was named to the All-Atlantic Coast Conference team for four straight seasons. She scored 59 goals and is the all-time leading goal scorer in the history of Virginia Women’s Soccer. After graduating, Hucles embarked on an extraordinary professional and international career highlighted by two Olympic Gold Medals, two World Cup appearances and 109 caps for the US Women’s National Soccer Team. Hucles was the U.S. Women’s National Team leading scorer in the 2008 Olympic Games. Playing for the Boston Breakers of the Women’s United Soccer Association, Hucles made a total of 57 appearances for the club and scored six goals. In 2009, Hucles announced her retirement from both club and international soccer.