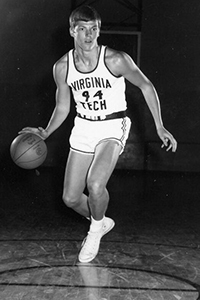 Allan Bristow’s name is synonymous with basketball in the state of Virginia.  The Richmond native began his long career as an All-State performer at Henrico High School before moving on to Virginia Tech.  While playing four years with the Hokies, Bristow led Virginia Tech to its first National Invitational Tournament title.  The 6’7” forward was taken by the Philadelphia 76ers in the second round of the 1978 NBA draft (21st overall) where he spent two seasons before signing as a free agent with the San Antonio Spurs in 1975.

Bristow spent four years in San Antonio and two with the Utah Jazz before joining the Dallas Mavericks.  He played in Dallas from 1981-1988 before retiring after ten seasons.  Long regarded as a scrappy competitor and one of the best passing forwards in the NBA, Bristow used his hard working and unselfish play to contribute to every team he joined.  Bristow’s ten-year averages of 7.8 points, 5.0 rebounds, and 3.2 assists helped reflect his all-around value.

Bristow began his professional coaching career as an assistant at San Antonio during the 1983-84 season before moving to Denver in 1984 where six years were spent as part of Coach Doug Moe’s staff.

On April 23, 1990, Allan was named Vice President of Basketball Operations of the Charlotte Hornets where he worked for two years before taking over as head coach of the Hornets on July 23, 1991, a position he held until 1996.  In his fourth season with the Hornets, he led them to their first 50-win season and their second play-off berth.

A keen judge of talent, Bristow later served as Executive Vice President of Basketball Operations for the Denver Nuggets.