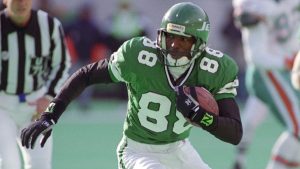 Al Toon from Newport News, Virginia was a star athlete on the football field and adjacent track for Menchville High School. His jumping ability was on full display both as a wide receiver, and as a track and field star, as he is one of three Peninsula District athletes to surpass 50-feet in the triple jump, a feat he accomplished three times. Following high school, Toon committed to the University of Wisconsin-Madison, where he became an All-BIG 10 performer in both football and track. During his Wisconsin career, Toon set school records for receptions, yards, and touchdowns, while also setting Big Ten and school records in track and field in the Triple Jump. Following college, Toon was drafted with the 10th overall pick in the first round of the 1985 NFL Draft by the New York Jets. Over the next 8-seasons, Toon would cement his place as one of the best receivers in the league, and in New York Jets franchise history. A three-time Pro Bowl selection, and three time All-Pro, Toon was named the 1986 AFC Offensive Player of the Year and led the NFL in receptions in 1988. He finished his career with 517 receptions, 6,615 yards, and 31 touchdowns. He has previously been inducted into the New York Jets Ring of Honor and was named a member of the Jets All Four Decade Team, celebrating the team’s 40th Anniversary.