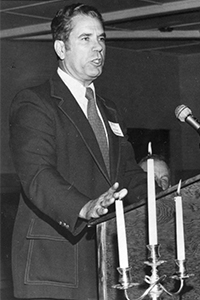 Abisha “Bosh” Pritchard was a Hopewell native, and one of the all-time great running backs in Virginia collegiate football history, but equally impressive are his credentials as one of the more colorful characters in any sport.

The 1942 graduate of VMI lettered in track, baseball and basketball at one time or another and was the vocalist with the Cadet dance band.  Pritchard served as Vice-President of Tel Ra Productions, noted in the 1950’s and ‘60’s as the nation’s top producer of television sports films.  His entry into that company was his retirement in 1952 from the Philadelphia Eagles as an all-purpose running back who starred with their league championship teams of 1947, ’48 and ’49.

Upon graduation from VMI, Pritchard played two years with the Eagles, but entered the Navy before returning to the pro game for the 1947 season.  At VMI, he had been All-Southern, and established several institute and conference records for his dashes which earned him such nicknames as “Breezing Bosh” and “Mr. Mercury.”  During his time with the Eagles, Pritchard was in the same backfield with Joe Muha, another VMI great.  His record from 1949 for most yards in punt returns with the Eagles was broken in the 1975 football season.

Former Richmond Times Dispatch columnist Chauncey Durden wrote in a 1968 article that Pritchard used to sing during practice at VMI and at the same time was the most relaxed and zestful college football player he had ever seen.  “Football to Pritchard was a grand game to be enjoyed as well as to be won.  He practiced and played as if football and for that matter life-was a song,” wrote Durden.

VMI men everywhere have cherished the memories of Bosh Pritchard, both on and off the field.  He will always be remembered as one of Virginia’s finest athletes.