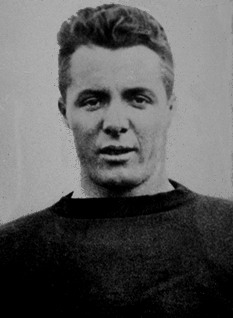 Truly one of the greatest athletes in Virginia history, Cy Young, a native of Charleston, West Virginia, attended three colleges, participating in the athletic programs of all three. In 1910-11, Young matriculated to Marshall College (now Marshall University), where he played varsity football and baseball. He attended the University of Michigan for one year, and then transferred to Washington & Lee University, where he was a four-sport player, lettering 16 times. During his football career at Washington & Lee, Young led the team in scoring four straight years and served as captain of the team in 1916. At that time, W & L played such powerhouses as Army, Navy, Georgia Tech, Indiana, North Carolina and Cornell. Young’s basketball career equaled his football career, playing four years at Washington & Lee where he led the team in scoring three of the four years, serving as captain in 1915. The Helm Foundation selected him in 1917 as an All-American basketball player. Young’s baseball career also covered a four-year period whereby he led the team in runs scored and in stolen bases each of the four years. He was captain of the 1917 team. Cy Young√ïs track record also covered a span of four years where he ran the 100 and 220-yard dashes. He only lost one race during his college career and held many of the school’s track records, some of which still stand. Following his playing days, he served in the Army in World War I, 1917-18. Later in life, he returned to athletics, coaching baseball at William & Mary College (1930-33) and basketball at Washington & Lee (1934-39). He retired as Washington & Lee Alumni Secretary in 1958. Young was selected to the College Football Hall of Fame in 1958 and to the West Virginia Sportswriters Hall of Fame in 1966. He is also an inductee of the Marshall University and Washington & Lee University halls of fame.