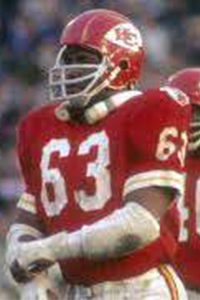 Willie Edward Lanier was born August 21, 1945, in Clover, Virginia.  He graduated from Maggie Walker High School in 1963 and attended Morgan State University where he received his degree in Business Administration in 1967.   He attended the Executive Program of the University of Virginia in 1975.

Lanier joined the Kansas City Chiefs in 1967, playing middle linebacker until 1977.  In 1970, he played in Super Bowl IV in New Orleans when Kansas City defeated the Minnesota Vikings.  Lanier was selected six times to the All-Pro NFL team, and in 1972, was named “Man of the Year” of the NFL.  At 6’1, he earned the nickname “Mr. Contact” for his rough style of play, and in 1971, was named the American Conference Defensive Player of the Year.  One of his greatest career highlights is his induction to the Pro Football Hall of Fame in 1986.