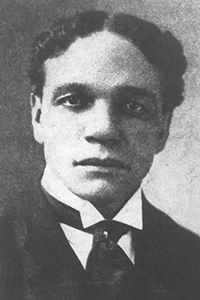 William H. Lewis was born in Norfolk in 1868.  He first played football as a center at Amherst College where he was captain of the team.

In 1892, Lewis entered Harvard Law School and under the eligibility rules at that time, was able to continue playing football.  Walter Camp, originator of the All-American selections, named him on his 1892 squad.  He was the first black player ever to receive this honor.  Although he weighed only 170 pounds, he excelled as a defensive player in the middle of the line.  Following his graduation he served as line coach at Harvard and later authored a book entitled, “How to Play Football.”

In 1911, Lewis became the first black man admitted to the American Bar Association and was later appointed Assistant Attorney General of the United States by President Howard Taft.

Lewis was the son of former slaves, but that did not keep him from working hard to get ahead.  Instead, it encouraged him even more to persevere and strive for a better life.  He went into law practice in 1913, later becoming one of Boston, Massachusetts leading criminal lawyers.  Lewis passed away in 1949, but he will always be remembered as one of Virginia’s finest athletes and one of the greatest success stories from our great state.