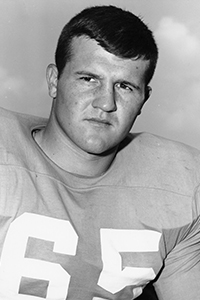 After graduation DeLong pursued his football career at the University of Tennessee.  He played middle guard on defense from 1962-1964.  He was named to the Associated Press all-sophomore team in 1962, and was voted defensive lineman of the year in the Southeastern Conference in successive years.  DeLong was selected to the College All-America team in 1963 and 1964.   In 1964 DeLong, 6-3 and 243 pounds, won the Outland Trophy as the nation’s best interior lineman, was picked Lineman of the Year by the Columbus Touchdown Club and Birmingham Touchdown Club, and was voted Most Valuable Player in the Senior bowl.  In 1964, he was captain of the Tennessee team and captain of the East team in the East-West Shrine Bowl.   In 1990, voted by fans, he was named to Tennessee’s all-time team, covering 100 years of football from 1890 to 1989.

DeLong’s son Keith, was a linebacker at the University of Tennessee and was captain and named All-American in 1988.  He was also selected to the “100 years of Volunteers” team in 1990.

After college DeLong was the number one draft pick of the Chicago Bears.  He went on to play in the National Football League from 1965-72 with both the Bears and the San Diego Chargers.  In his seven years with the Chargers, he was selected to play in the Pro-Bowl and was Most Valuable Player for the San Diego Chargers.  DeLong has achieved much success throughout his career, but the most outstanding career highlight is his induction into the National College Football Hall of Fame in 1993.