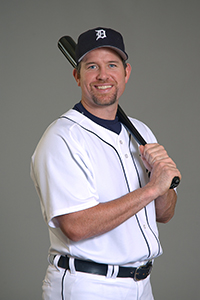 Sean Casey is a graduate of the University of Richmond, where he was a three-time All-CAA selection and captured the NCAA batting title during the 1995 season with a .461 batting average. Casey helped lead the Spiders to their first win in the NCAA Tournament in 1995 when they defeated Jacksonville 8-2. Casey was a second-round pick in the 1995 MLB Draft by the Cleveland Indians.  Over his 12-year Major League career, Casey played first base for the Cleveland Indians, Cincinnati Reds, Pittsburgh Pirates, Detroit Tigers and Boston Red Sox. Casey was a three-time All-Star selection, and posted a career batting average of .302, while hitting 130 home runs and driving in 735 runs. In 1999, Casey received Major League Baseball’s Hutch Award, given to the player who “best exemplifies the fighting spirit and competitive desire.” Casey was selected to the Cincinnati Reds Hall of Fame in 2012. Photos courtesy of the Cincinnati Reds