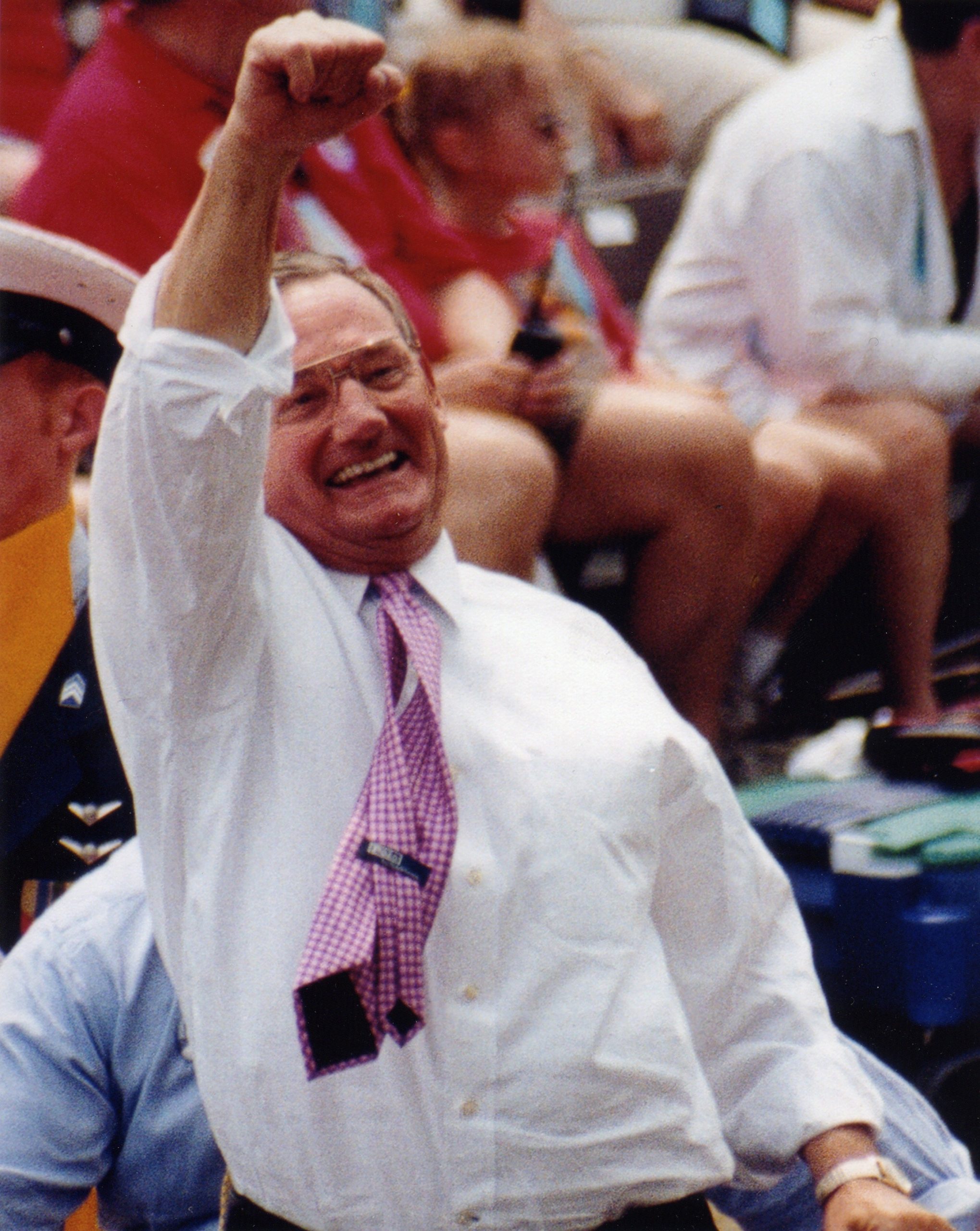 With many sports history firsts credited to his name, Senator Russ Potts added another first to that list as the first sports marketing professional ever inducted into the Virginia Sports Hall of Fame. The Winchester, Virginia native changed the world of collegiate sports through his innovative marketing ideas and an unmatched enthusiasm for athletics. As an organizer of 659 events, Potts has staged more events than any individual in the western hemisphere. Potts began his career as the sports editor for the Winchester Evening Star upon graduation from the University of Maryland in 1964. Six years later, he returned to his alma mater to become the first college Sports Marketing Director in the history of college athletics. Currently, there are 326 college Sports Marketing Directors. A true pioneer, Potts spent his first few years in this position creating the first corporate partners program for college athletics, the first prime-time men’s college basketball television package in college history, and the first commercial scoreboard package at the college level. With Potts at the helm, Maryland also benefited from a rise in football attendance. He is the only person to ever set the average college football attendance increase record twice at two separate institutions. In 1976, he initiated the first nationally televised women√ïs basketball game played between Immaculata College and the University of Maryland. In what is most likely his most celebrated accomplishment, Potts arranged a historical match-up of 7-footers between the University of Virginia, led by Ralph Sampson, against Georgetown University and Patrick Ewing in 1982. The game, Turner Broadcasting√ïs first ever major sports cable telecast, continues to be the largest television payday for a college basketball game during the regular season. After leaving the University of Maryland, Potts served as the Director of Athletics at Southern Methodist University. He then created the first prime-time college basketball package in Southwest Conference history and the nation’s first television package for state high school football championships in seven states. In 1978, the Dallas Sports Association honored Potts and named him recipient of the “Big D” award, which is given to outstanding Texas sports figures. Potts enjoyed a new challenge in Major League Baseball as the Vice President of the Chicago White Sox. There, he set the all-time single game attendance on opening day at Comisky Park, where the White Sox played against the Boston Red Sox. When he returned to Virginia, he formed Russ Potts Productions, Inc., setting records at both the collegiate and professional levels. As a former member of the NCAA Division I Men’s Basketball Committee, Potts put NCAA basketball in the first dome facility, the Louisiana Superdome. He set several all-time attendance records, including those at the Louisiana Superdome, the Thompson-Boling Center at the University of Tennessee, and the St. Petersburg Dome. Potts also set all-time gross revenues and payday records in events involving the World Champion Chicago Bulls. Additionally, he set an NCAA record by creating the most NCAA certified exempt events in the history of college athletics, including the Jim Thorpe Association Classics, the Hispanic College Fund Classics, the Colonial Athletic Association Basketball Classic, the John Thompson Foundation Classics, the Eddie Robinson Basketball Classics, the Black Coaches Association Classics, the CoSIDA and the NABC Basketball Classics. In 1992, Potts was elected to the Virginia State Senate. In 2002, Potts was honored at the All-American Football Foundation Banquet of Champions, where he received the Outstanding