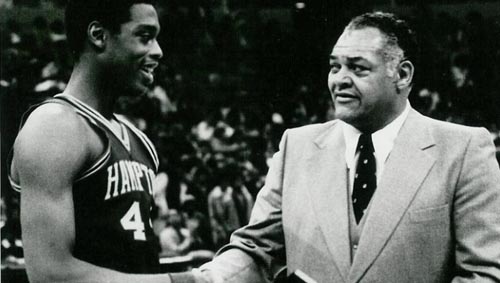 Rick Mahorn played college basketball for Hampton Institute (now Hampton University) from 1976 to 1980, where he owns 18-school records and earned NAIA All-American honors. Mahorn also earned All-CIAA honors in 1977-78, 1978-79, and 1979-80, as well as being named the 1978-79 CIAA Player of the Year. Among his school records at Hampton, Mahorn is the all-time leader in career points with 2,418, career rebounds with 1,465, career scoring average with 20.3, most points in a single game with 48, and most points in a single season with 855. After his senior year, Mahorn was drafted by the Washington Bullets with the 35th overall pick in the 1980 draft. His most memorable years came with the Detroit Pistons after being traded in 1985. There he joined Isaiah Thomas, Joe Dumars, Bill Laimbeer, and Dennis Rodman. The team’s physical and intimidating play led them to become known as the “Bad Boys”, with Piston announcer George Blaha dubbing Mahorn as the “Baddest Boy of them All”. Mahorn helped lead Detroit to the 1989 NBA championship. After being selected by the Minnesota Timberwolves in the 1990 NBA expansion draft, Mahorn was traded to the Philadelphia 76ers, where he teamed up with Charles Barkley. The duo’s collective rebounding dominance became known as “Thump N’ Bump”, with Mahorn earning NBA All-Defensive Second Team honors. In total, Mahorn would go on to the play 18-season in the NBA, a total surpassed by only 18-players in NBA history.  For his career, Mahorn averaged 6.9 points and 6.2 rebounds over 1,223 games, and his teams reached the playoffs in 13 of his 18 seasons.  After his playing days, Mahorn joined his former teammate; Bill Laimbeer’s coaching staff on the WNBA’s Detroit Shock, where he would be a part of two WNBA championships. Mahorn remains in the game to this day as a broadcast analyst for the Pistons.