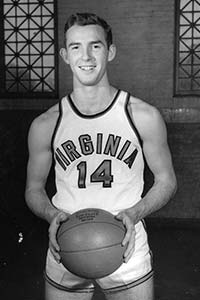 Wilkinson played guard at the University of Virginia from 1952 to 1955.  In 1955, his jersey number “14” was the first basketball number to be retired at the University of Virginia.  He was selected for membership to the Helms Foundation All-American first team, AP All American team, and was recognized on the All-State and All-Conference teams all three of his varsity seasons.  Wilkinson also played in the 1955 East-West All-State Game in New York.  The National Association of Basketball Coaches in 1980, in selecting their Silver Anniversary College All-American team, selected Wilkinson on the five-member team-recognizing not only their athletic abilities but also their professional achievements.  Wilkinson was drafted by the Boston Celtics in 1955, but never played in the NBA due to serious injuries received in an automobile accident prior to going to Boston.  He is one of two people selected to both the Virginia and West Virginia Sports Hall of Fame.  Greenbrier Military School inducted him into the Greenbrier Hall of Fame as a “Scholar /Athlete&Gentleman.”  Wilkinson was the UVA freshman basketball coach in 1956 and assisted Billy McCann with the varsity in 1958 prior to returning to Law School.

Wilkinson returned to the University of Virginia following his tour of duty in the United States Army to earn a Law Degree in 1962.  Wilkinson has been active in many local state and national civic affairs and has won many awards for contributions to his community and state.  He has served as President of the Alumni Association of the University and is remembered by many UVA alumni as one of the greatest basketball players ever to grace the University’s court.