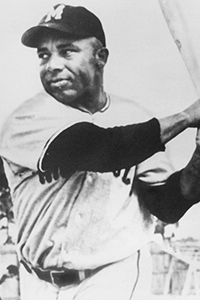 Ray Dandridge, a native of Richmond, was a slick fielding third baseman in the Negro National League before the game was integrated.  Many people say that there has never been a more masterful third baseman than Ray Dandridge.  He was a versatile baseball player excelling at shortstop and second base.  Dandridge was a fantastic hitter for average, rapping the ball at a .370 clip during the 1944 season while leading the league in hits, runs, and total bases.

This great third baseman began his professional career in 1933 by hitting .333 with the Detroit Stars of the Negro League.  He also played for Tom Wilson’s Nashville Blue Giants for a short period of time.   Later, Dandridge signed with Dick Lundy’s Newark Dodgers and hit .436 and .368 during his two seasons.  This team merged with the Brooklyn Eagles to form the Newark Eagles.  Dandridge continued as a star player with Newark for the remainder of the 1930’s, hitting .354 and .305 in his first two seasons with the Eagles.  During his time in the Negro National League, he compiled a lifetime .355 average in league play.   In addition to playing in three All-Star games, Dandridge posted a lofty .545 batting average for the classics.   After leaving the Eagles, Dandridge played for the Venezuelan League, and also played in Mexico, Cuba, and the Dominican Republic.  His baseball career in Mexico earned him a place in the Mexican Hall of Fame.

After the color barrier was broken, he signed with the New York Giants and was sent to Minneapolis in the American Association where he was the league’s MVP in 1950 at age 37.  Upon arrival there, the right-handed batting whiz promptly compiled averages of .363, .311, and .324.  Dandridge continued in the Pacific Coast League for another year and played a final season with Bismarck, North Dakota in 1954, before ending his diamond career.  Dandridge was duly recognized as one of the greatest third basemen in the history of baseball, when in 1987, he was inducted into the Baseball Hall of Fame in Cooperstown, New York.