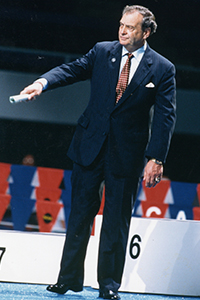 Raymond A. Bussard is a native of Highland County, VA who lettered in basketball, football and track at Bridgewater College in the 1950’s.  He drew national attention for his versatility in track.  At the 1951 National AAU meet, he was runner-up in the all-around title.  The following year, he won the all-around title.

After graduating from Bridgewater College, Bussard entered the high school coaching profession, and through the years established one of the most phenomenal coaching records in the nation.  He coached football for eight years, basketball for eighteen years, baseball for nine years, track and field for eighteen years, and intercollegiate swimming for twenty-one years.  His record for high school football is 43-24-12, basketball 241-99, baseball 128-52, track and field 172-7 and intercollegiate swimming 252-20.

Bussard has achieved many accomplishments throughout his career in sports.   In addition to his track accomplishments, he was National All-Around Track Champion runner-up in 1951 and Track Champion in 1952.  He was selected as NCAA Swim Coach of the Year in 1972 and 1978 and SEC Swim Coach of the Year in 1972, 1974, 1976, 1977, and 1978.  In 1984, Bussard was inducted into the Tennessee Swimming Hall of Fame and was selected as National Intercollegiate and Scholastic Swim Coach of the Year.  In 1987, Bussard received the Bridgewater College Distinguished Alumni Award.  He was inducted into the Tennessee Sports Hall of Fame in 1988 and Bridgewater College Athletic Hall of Fame in 1994.  In 1999, Bussard was selected for induction into the International Swimming Hall of Fame.  The University of Tennessee has named their intercollegiate swimming pool in honor of Raymond Bussard.