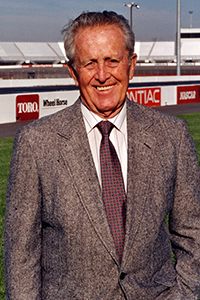 One of the founding fathers of modern day NASCAR, Paul Sawyer is recognized as a guiding force behind the emergence of America’s fastest growing sport. A dream that began in a garage in Norfolk would eventually propel this Virginia native to the greatest heights of motorsports. The Tadlock racing family in Norfolk first exposed Sawyer to the world of competitive racing. As a boy in the 1930’s, Sawyer was a regular fixture in the Tadlock’s garage where he learned the fundamentals of motorsports. After World War II, Sawyer began his career as a car builder and eventually became a track owner. Operating tracks in Virginia Beach and Wilson, NC prepared Sawyer for the challenges of race promotion and track ownership. In 1955, he and driver Joe Weatherly (VSHF Class of 1976) leased the Fairgrounds Raceway in Richmond. Sawyer’s entrepreneurial spirit and unbridled enthusiasm transformed the 6,000-seat dirt track into a mecca for race fans across the country. In the summer of 1968, Sawyer paved the one-half mile dirt track. The track expanded as the popularity of NASCAR swept the country. As the phoenix rises from the ashes, so too did Sawyer’s gem emerge from the dusty, humble beginnings of the Fairgrounds. The once modest 6,000-seat dirt track eventually became the 103,000-seat, three-quarter mile Richmond International Raceway. From his days as a boy spent in the Tadlock’s garage to the NASCAR Hall of Fame, Paul Sawyer has realized his dream and is universally recognized as one of the true pioneers in motorsports. His influence on Virginia’s sports scene is immeasurable and his impact on the growth of NASCAR will be felt for years to come. Paul Sawyer’s induction into the Virginia Sports Hall of Fame is a fitting tribute for such a remarkable visionary.