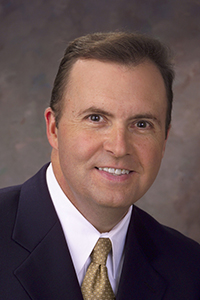 For more than three decades, Mike Stevens has been working to put Virginia’s athletes and the sports they play in the spotlight.
After graduating from Virginia Tech in 1983 with a Bachelor’s degree in Communications, he began his broadcasting career as the Sports Director for K92-FM radio in Roanoke. Two years later, he changed mediums and left the area’s top rated radio station for the region’s number one television station, WDBJ-7.
During his 23 year tenure as the Sports Director of Southwest Virginia’s CBS affiliate, he served as a reporter, lead anchorman and did live play-by-play broadcasts for high school football, college basketball, minor league baseball and stock car racing.
In addition, he was a fixture on the station’s marquee sports program, Friday Football Extra. Stevens hosted over 350 consecutives episodes of the half-hour high school football show that became the model for hundreds of other such programs around the country.
He also helped highlight local sports figures, athletes and their accomplishments in the greater Roanoke Valley by writing a monthly column for the Roanoke Valley Sports Journal and Play by Play magazines for 18 consecutive years.
Stevens has been honored by a number of organizations including the Virginia High School League and the Southern Christian Leadership Conference. He was an original member of the Dudley Award selection committee and throughout his career he has gladly offered his services to a number of non-profit organizations. In 2014, he was named Volunteer of the Year by the Juvenile Diabetes Research Foundation.