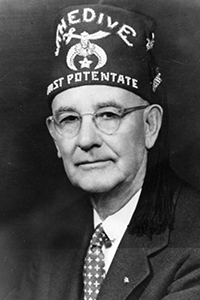 Known as the “Father of the Oyster Bowl”, Blassingham conceived the idea of the game to raise funds for the Shriner’s Hospital while in the hospital himself, recovering from a heart attack in 1936.  The Oyster Bowl began to truly take shape when Blassingham met fellow Shriner and Portsmouth native, Bill Kaufman.  Kaufman had moved to the west coast and was active in the East-West Shrine Game for college All-Stars.

The first Oyster Bowl was played in 1946 between Norfolk’s Granby High School and Clifton High School of New Jersey.  In the middle of a 31 game winning streak, Granby beat Clifton 6-0.  This original game raised $35,000 for the Shriners Hospital.

In 1947, the Virginia High School League voted to discontinue high school participation in post-season games.  However, by 1948 a number of colleges expressed interest in the Oyster Bowl, and since that time, the competitors have been strictly collegiate.

Despite concerns over his health, Blassingham continued his intense involvement with the strategic planning and organization of the Oyster Bowl, often with a physician on hand.  In honor of his tireless efforts, the Most Valuable Player of the Oyster Bowl each year receives the “Melvin T. Blassingham Memorial Trophy.”

The final Oyster Bowl was played in 1995 as Georgia Southern defeated Virginia Military Institute.  After 49 years, the annual football game has been replaced by the Oyster Bowl Golf Classic.

In 1946, Blassingham received the “Man of the Year” award from the Norfolk Sports Club and was named “First Citizen of Norfolk” in 1948.  As one of Norfolk’s outstanding civic leaders, Blassingham headed Khedive Temple war-bond drives that raised more than $7,000,000.  He was active in the Community Fund, Norfolk General Hospital, the Salvation Army, Navy YMCA and Park Place United Methodist Church.  Blassingham was also a 32nd degree Mason.