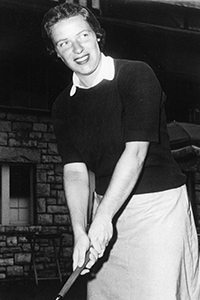 From 1957 through 1962, Mary Patton Janssen was the state’s top female golfer.  Short-lived as her reign was, it remains without peer today.  A native Pennsylvanian, Janssen has resided in Charlottesville since she was 15 but didn’t begin playing golf until she was 21.  She chose to enjoy fox hunting until her favorite horse was injured and had to be put down.  The hunters’ loss became golf’s gain.

With heavy encouragement from her parents, Janssen became a stickler for golfing perfection.  Benefiting from countless hours of practice, she won six successive state women’s amateur golf titles, five by huge margins.  She also competed on the national and international level, winning the mid-Atlantic Amateur in 1953 and the Eastern Amateur and the West Palm Beach Amateur in 1958.  In 1956, Janssen played in the first All-American finals in the British Women’s Amateur and was a National Championship finalist in Canada, France, and Cuba.

Although she did not emerge as a major state force until 1957, she was no overnight sensation.  As the years passed and she became more successful, Janssen also became more superstitious and more devoted to tedious practice sessions.

After deciding she could not face the sustained pressures of the professional tour, she finally encountered a stiff test in the last of her string of State Amateur successes in 1962.  Facing 19-year-old college student and fellow Hall of Fame inductee Robbye King Youel, she came from a 4-up deficit after 27 holes to triumph 1-up, when King three-putted the final ball.  Janssen, at age 37, then retired.  In 12 years she had won 21 tournaments, finished second in another seven and felt she had nothing left to prove.