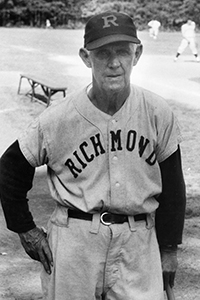 Malcolm “Mac” Pitt, served as the University of Richmond’s Baseball Coach for 36 years and its Athletic Director for 25 years. He is a member of 4 Halls of Fame in addition to the Virginia Sports Hall of Fame. Pitt has been honored by the Helms Foundation Basketball Hall of Fame (Class of 1963), the Helms Foundation Baseball Hall of Fame (Class of 1966), the American Association of College Baseball Coaches Hall of Fame (Class of 1970) and the Richmond Professional Hall of Fame. Pitt began his association with the University of Richmond in 1915 as an enrolling student. He played quarterback on the football team, third base on the baseball team and also ran track. Following graduation, Pitt took a coaching job at Fork Union Military Academy, returning to U of R in 1928 as assistant football coach. In 1933, he replaced Frank Dobson as Basketball Coach. His 20-year record was 197 wins and 168 losses. His teams won 3 State Championships and the 1934-35 team went undefeated for 20 games. In 1935, Pitt took over as baseball coach at U of R. His teams won 426 games and lost 257, tying 5 in 37 seasons. His Spiders won 16 State Championships, 2 Southern Conference Titles and tied for 2 more. Among the standouts Pitt sent to the major leagues were Lew Burdette, Porter Vaughan, Bucky Jacobs, Jack Sanford, Herb Hash, Lou Ciola and George Lacy. Pitt was the Director of Athletics from 1941 to 1967. He served as a Committee Member for Southern Conference Basketball and the NCAA. He was Southern Conference Tournament Director from 1955 to 1963.