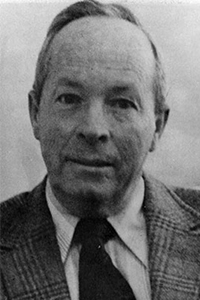 Lou Plummer was born on December 12, 1912 in Stamping Ground, Kentucky. He first came to Virginia from Hamilton High School in Ohio with a Track & Field scholarship at The College of William & Mary in Williamsburg.

Plummer set a William & Mary record in track for the two mile, which stood for many years. He also competed in the mile, 880, and 1000-yard events. After graduation he taught Physical Education and coached at George Wythe Junior High in Hampton, Virginia. Plummer coached football and track for Newport News High School beginning in 1942. Next, he became an infantryman and saw two years of Army service in Europe during World War II. Upon his discharge, Plummer earned his Masters Degree in Health and Education (1949) from William & Mary. He resumed his coaching career at Newport News High School and posted a 13-8-9 record in football. His teams won track championships in 1947, 1948, 1949, 1952, and 1953.

Plummer joined the Norfolk Division of William & Mary (now Old Dominion University) as a track coach and physical education instructor in 1956. From 1957 to 1966, his teams had a 55-20 record. That record accounted for titles in State Little Eight competitions in 1961-1964, and second place in 1965 – 1966. In the Mason Dixon conference, they placed second in 1963, and third from 1964 – 1966. In addition, Plummer led the schools cross-country teams to several State Championships. When track was discontinued at the school, he became Director of Evening College until his retirement in 1974.